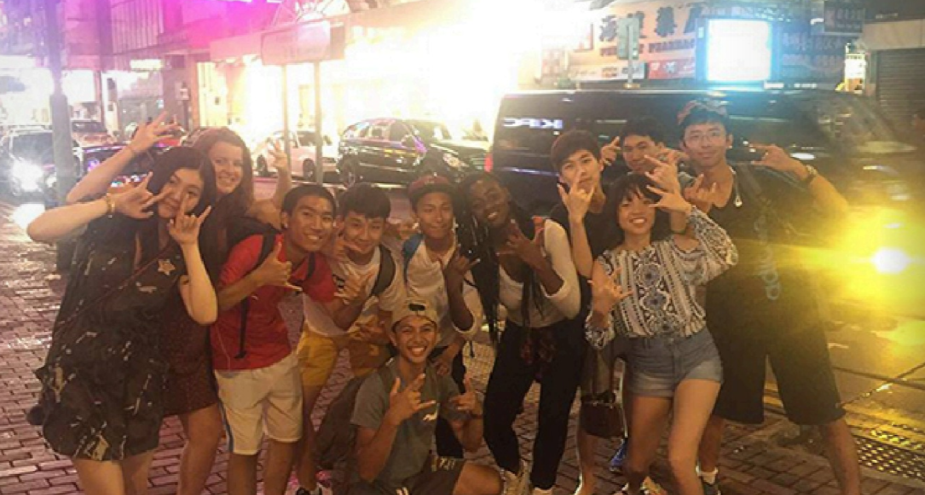 In 2016, 18 San Francisco Bay Area high school students explored Hong Kong & Guangzhou, China, through the lens of environmental sustainability. To reflect on their experiences, each participant submitted a photo essay. Below is an excerpt from Allan. The rest can be found in the Flipbook at the bottom. To learn more about the Environmental Youth Leadership Program, please visit the program page.

20:04. Mong Kok, Hong Kong – The door slams with a thunderous bang. All eleven of us cramp up in a small, dimly-lit room. I sense a long night ahead.

Wingyan dashes to the board first. Alicia quickly chases her down. Soon it’s complete pandemonium. Perhaps I shouldn’t have suggested the idea of karaoke in the first place. But, for me, this quarrel represented something much more than just a simple fight over which song to choose. This feud represented longstanding misconceptions between the East and the West.

Simple arguments like these have been long served as a barrier separating our two distinct cultures. Mind that only months ago, Obama chewing gum during the APEC conference in Beijing was seen as “gravely disrespectful” by millions of Chinese netizens. Now, in no way was this song dispute going to end up as a diplomatic fallout, but I saw little reason to fight over the power of the mic. But as a proud Chinese American, or as I like to say, an ABC, I often see through a lens that both sides are often unable to catch a glimpse of. I understand the Confucian mentality of a Chinese person and can simultaneously decipher the venturesome mind of an American teen. After calmly settling both sides down, I utilized my cross-cultural music tastes, achieved through years of watching The Voice of China with my parents and jamming to the latest songs on FM 99.7 with my friends to suggest Shakira’s 2010 hit, “Waka Waka”. It was a match made in heaven.

None of us – the Chinese nor the Americans – knew what Shakira was saying when she chanted “tsamina mina eh eh,” but what we did know was that we were singing in unison, sharing practically muted microphones and endless laughter. For me, tearing down these walls has been a hallmark and aspiration of my life thus far. I not only learned about the importance of reconciliation, but I also realized how even the smallest of things can eventually lead to tremendous change in the future.

I chose this photograph because it represents a time when we, the students, didn’t identify ourselves in any particular group; we saw ourselves as teens who just wanted to have a good time and sing our hearts out. Especially in the tense times the world is going through now, it is more important than ever that we are able to understand each other – whether that means simply choosing a song or ultimately deciding how to combat climate change.