Do Our Bit Project: VIA Medical Programs Alumni Doing Their Bit to Respond to COVID-19

Briefly, their goals are to understand the challenges that current undergraduate and graduate students face as well as their perspectives on what should be done in response to COVID-19 and ultimately offer ideas and promote discussion about ways to address the pandemic.

Below is a condensed version of the conversation.

Can you briefly share what you’ve done since your participation in MED/EHC?

Mariko: I headed Team Medics (a student-run organization founded by MED 2014 alum Ami Suzuki that seeks to foster English and cross-cultural communication skills among medical students in Japan) shortly after participating in MED. Last year, I decided to take the Step 1 exam for the US Medical Licensing Examination and passed!

Anna: Shortly after MED 2017, I applied to be a fellow for EHC 2018 and had a great experience. I don’t formally belong to any clubs or organizations, but I often hold study sessions for my peers and actively seek out and attend other study sessions and webinars. Before COVID-19, I would occasionally go to Tokyo to attend study sessions hosted by Team Medics.

Yukiko: After MED, I was involved with Team Medics along with Mariko. The opportunities to practice exchanging opinions during MED were helpful in developing my ability to express my ideas during my involvement with Team Medics. Prior to MED, I was not used to sharing my opinions.

Asuka: I joined EHC as a first-year student. I didn’t know anything and couldn’t keep up with the discussions that the advanced medical students were having. I realized how much I needed to learn, both in terms of medicine and English skills. So I decided to get more involved with Team Medics, and as a third-year student now, I have increased my involvement. Now that the Olympics has been postponed, we’re currently deciding what to do, as we were hoping to volunteer at the Olympics to provide medical support to foreign patients.

How often have you stayed in touch with one another and with other participants since the program?

Mariko: I randomly send LINE messages to Anna every once in a while and not necessarily about medical things. Like, I will ask for a movie recommendation.

Anna: I go to Tokyo occasionally to attend Team Medics seminars, and every time I do, I’ll message Mariko and Yukiko. Ironically, I’m not as connected individually with the MED participants from Kansai. I’m very glad that I’m part of the VIA MED and EHC networks – this made it easier to spread the word about our Do Our Bit survey!

Asuka: Ever since I started getting involved with Team Medics, I’ve gotten to work with Mariko and Yukiko. And I still keep in touch with three of my closest friends from EHC 2018. We have our own LINE group where we exchange information and send birthday messages.

How did the Do Our Bit project begin? 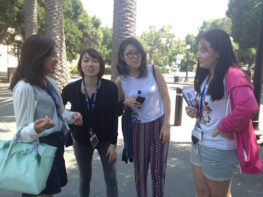 Second from the left: Mariko Nishihara [from MED 2017]

Mariko: It all started when I called Yukiko over the phone. I was planning to study abroad in February but that got canceled due to COVID-19, and I was telling her this situation is bad. At this point, we weren’t planning to do a survey or anything. Yukiko and I were just reflecting on the worsening situation, especially in New York. We talked about how it felt wrong to not be doing anything to contribute as medical students. We also talked about how we didn’t know enough about what’s happening in other countries.

Before I participated in MED, I was narrow-minded and inward-looking – I didn’t actively seek new perspectives. But after participating in MED, I realized the importance of looking outside – for example, watching foreign news or reading foreign newspapers. But I realized that people around me were not interested or aware of what’s going on in the rest of the world.

So our first thought was: what if we translate articles from foreign media into Japanese and then share on social media? That was actually our original plan. But then we realized that there could be issues with accuracy, and we didn’t want to contribute to potentially spreading fake news. That’s when we decided to instead conduct a survey to determine the level of understanding and awareness of COVID-19 among students.

Yukiko: And that’s when we reached out to Anna and other Team Medics staff to see if they’d be interested in helping develop and conduct the survey.

Anna: The four of us, along with a few other Team Medics staff, started meeting via Zoom in early April and met a total of 5-6 times. We met for about 2.5 hours each to talk about and design the survey. We really struggled with translating the survey into English!

What are the goals of Do Our Bit?

Mariko: One goal is to provide opportunities for undergraduate and graduate students to think critically and have discussions about COVID-19 and its implications for their lives and for society. Another goal down the line is to formally document the survey responses and develop resources that universities can use in the event of a pandemic. Currently, students are struggling and professors are also struggling to teach in this environment. We want universities to better understand student needs, so we want to document those needs so that universities can better meet students’ needs.

Yukiko: We wanted to survey not only medical students but also students from other disciplinary backgrounds because we perceived that medical students would probably have higher levels of awareness about the severity of COVID-19 compared to their non-medical counterparts. So we wanted to be able to compare and contrast any similarities and differences across students from various disciplines in terms of their perceptions of COVID-19.

Anna: We wanted to keep the survey to college and grad students, so people in their 20’s roughly. We perceived that young people were not so aware of their potential roles in spreading the virus, so we were curious to find out if that was true.

Asuka: We also perceived that medical students were more health-conscious and careful, but we wanted to find out more how students from other disciplines were perceiving and responding to the situation.

Mariko: And we thought that there may be differences in perceptions based not only on major but also on where people live. That’s why we wanted to reach out to students from other countries.

How many people ultimately responded to the survey? And what were their backgrounds?

2,070 people responded to the survey! We had no idea how many people would ultimately respond, but we were pleasantly surprised by the high response rate. We’re in the midst of analyzing the responses. The majority of students who responded were from the health care disciplines – about 70%. And most of the students who responded were Japanese. But, there were a lot of different majors represented in the remaining 30%, ranging from art, history, and education to business, media/IT, and engineering. We got a number of students from the U.S. across the different states. We had a few from Australia and Europe, one person from Canada, one person from Egypt, and a handful of international students from Asian countries currently studying in Japan.

Have you started analyzing the responses? And if so, have you noticed anything interesting so far?

Mariko: A couple of things we noticed: gargling is very common in Japan but not so among foreigners, and foreigners are more likely to agree with and follow lockdown orders compared to Japanese. It seems like people who live in places where the number of deaths has been high tend to perceive the situation more seriously than those who live in places where the death count has been low. So, in general, foreigners seem to perceive the situation much more seriously than the Japanese, since the death count in Japan has been relatively low thus far. But even within Japan, we’re noticing differences between students in Tokyo and those in other places. 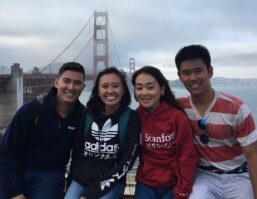 Second from the right: Yukiko Ota (wearing the Stanford Medicine hoodie) [from MED 2017]

After you finish analyzing the responses, what would you like to do next?

Yukiko: We could do another follow-up survey later in the year, perhaps 2-3 months from now or a year later.

Mariko: Since we kept the survey anonymous, we wouldn’t be able to follow up with the same people, but getting a snapshot a few months or a year from now could be interesting. Students’ perceptions will probably be different by then.

Mariko: I strongly believe that Do Our Bit started because of my participation in MED. If not for MED, I would not have had the mindset to initiate a project like this. MED really helped me grow.

Yukiko: I knew Mariko from before MED, and it’s amazing how much she’s changed! (laughs) I continue to be grateful for the experiences I gained at MED; it really increased my motivation as a medical student. 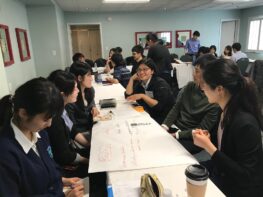 Asuka: EHC was an opportunity for me to look outward, and it was so stimulating to be able to talk with so many different people including Stanford students and organ recipients and family members of donors. EHC helped increase my interest in what is happening overseas and comparing and contrasting various issues in Japan and the rest of the world.

Anna: In terms of our survey, I was surprised by the different worldviews that were represented. Some of the respondents from other countries were concerned about the implications of COVID-19 on the distribution of power and money in the world – I was definitely not thinking at that level. Conducting this survey has been an opportunity to think about how each country is responding to uncertainty. And with respect to my participation in MED and EHC, it felt really good to have open, focused discussions about medical education especially. Participating in these discussions has set a helpful foundation for subsequent discussions I have had, including with the Do Our Bit project team – it’s been much easier to have discussions where we freely share ideas and provide constructive feedback, with the shared purpose of achieving something together.