Melissa Golden: This summer you piloted a new program model – Global Leadership & Engagement in Thailand. As part of our strategic plan, VIA 2020, we are building towards running more programs for Asian participants in Asia.

To start off with, could you explain how the program came together – what factors led to it being possible to facilitate this summer?

Christy Inhulsen: The groundwork started with a chat between Yi, our social innovation director and Viria, the Impact Director for the GLab, School of Global Studies at Thammasat University. Given my background in Thailand, I was brought into the conversation with Viria who then introduced me to Chanya, another lecturer at Thammasat University (both Stanford graduates) to plan the program. Kazutoh (VIA Executive Director) and Thammasat were very supportive of our program proposal. We decided to use the leadership model introduced in our Silicon Valley GLE programs, but use a group project component instead of having them design their own website. This change was because not all students would have their own laptop and to allow them to practice their leadership skills within project planning and presenting. The program’s goal was to help participants build their values and mission, giving them concrete next steps for what they want to do when they return to their home communities. Doing the program in Thailand is less expensive as well, but it’s also more accessible and I feel more connected to resources there.

MG: What were your goals for this pilot, and what was your mindset going into it?

CI: My goals were to build a community of individuals and develop their leadership skills, so that they can go back to their communities and continue on the path they were interested it. For VIA, the goal was to see how well an Asia-to-Asia model works out there – logistics, budget, how feasible it is to implement.

Going into the program, there was a lot happening in the US at the time which had me feeling very discouraged and emotional. The lack of empathy in communities across the country was very depressing. I think coming from that atmosphere into the program really reinforced the need to be present, listen, and share compassion – and encourage the participants to do so as well.

MG: You’ve directed six Global Leadership & Engagement Programs in San Francisco in the past three years. How did this 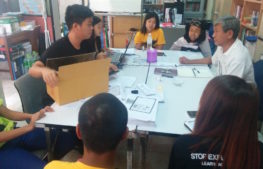 CI: In every program, the participants develop a community and become pretty tight-knit. But in this program, we were doing a project that connected with their communities. All of the students being from Southeast Asia, they share similar values and an understanding of the possibilities. They were learning from others in the same region rather than from Americans. Getting around seemed easier as well. I felt more comfortable with them going off on their own because the environment and transportation are similar to their local communities, whereas I’m more concerned about participants getting around San Francisco because it’s less familiar and can be harder to navigate.

Also, all of the students were on scholarships. Not to say that if you come from a wealthy background, you don’t have the ability to empathize with community needs, but there are different ways to build empathy depending on your background. All of them have had struggles, so they look at things a little bit differently. Expectations from participants about the program are different when it’s been all paid for. They are more open and more present. Since it was such a small group, I think that also helped them bond and really work to share their thoughts and feelings.

MG: Who were the participants? How did they shape the program? 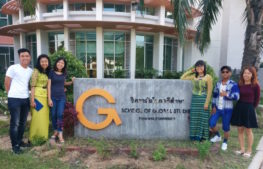 CI: I had three Burmese participants from Mandalay, all interested in education. One of them, Lily, is very active in debate; she even went to Estonia for an international debate event. She is a librarian and wants to have more libraries and creative spaces in Myanmar. Max and Yin were the youngest with their interest being in education. Then we had two participants from Vietnam – Ngoc and Vu. Both were involved in the Sports for Social Change program – Ngoc was a coordinator and Vu was a participant. Additionally there was one Thai student, Toon, who had applied for the GLE program in Silicon Valley, but ended up joining this program because she couldn’t afford the the Silicon Valley program. We also had a Thai coordinator, Nook, from Thammasat University who was very helpful with coordinating some of the activities and introducing the participants to Thai culture.

Since the program has ended, I’ve been more in touch and acting as a mentor for the participants. This is something I hadn’t been able to do as much for previous program cohorts, as they were bigger groups.

I feel this is so critical to their development as future global leaders and changemakers in their communities, but mentorship and ongoing support is lacking because we just don’t have the capacity for it. I’m really glad I’ve been able to do that for this group.

MG: Was there a moment during the program that was particularly memorable or stands out for you?

CI: Watching them present their projects to the Burmese school founder, Myint, was wonderful because they really took ownership of their projects and I was able to take a step back. I gave them the parameters, but it was exciting to see where they took that and what they came up with on their own. The lifemap activity and the design-thinking activities were also really fun and helped with our initial bonding.

The one thing I hadn’t done before was language sharing as part of the initial activities to get to know each other. It was a lot of fun – I was surprised how much they enjoyed it and continued to use the words they’d learned in each other’s languages throughout the program.

It was also great to be there for their “firsts” – first virtual reality experience, first Indian meal, the whole thing was great and we became a family!

MG: After running this pilot program, what are your hopes for future iterations?

CI: For me personally, I want to keep this kind of program small. I want to look for foundations who could help fund the program and are interested in supporting this very personalized impact. I’d also like to look for grants for Americans to go over and participate in the program. I think the next step is to have the participants become trainers in their own communities. Some of this cohort have even started to do that already on their own, and I’d really like to see that supported.

MG: How do you see these kinds of programs – short-term programs for Asian participants in Asia – supporting VIA’s mission 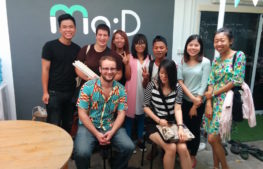 and the community it seeks to create?

CI: I think it’s already happening – we’re trying to strengthen a community of changemakers and have them go back to work in their communities. I want to create a cohesive plan for participants to have support after the program – either through other short-term program participants, or through our Global Community Fellows. We have an amazing, growing network of very inspired and motivated people. The more we can connect and support them, the more sustainable the community will become.