Voices of Respect and Acceptance

I’m a participant from Japan. Before arriving, I worried about that I can get along with people in America. In this program, I researched about the bias toward LGBTQ because San Francisco is one of the areas which has LGBT social movement and there are many communities for LGBTQ. In my survey, I interviewed some LGBTQ people. I think that the best way to confirm these is to interview LGBTQ and listen to fresh voice of them. Thus, I decided to interview them to hear their feelings about the bias.

When I called or sent emails to make an appointment, they accepted immediately. In interviews, all of them were very kind and supportive. I asked these questions: One part is about their experience around their sexual identity in their childhood and parents’ or friends’ or teachers’ attitudes. Another is about their opinions about hate crimes. The other is about important things to accept LGBTQ and their expectation and way to solve or remove bias from the society. These are very sensitive, but they answered questions and sometimes added more stories. They mainly said that education is one of the most important things. This is because many people don’t know about LGBTQ precisely. They also said it is needed, talking about LGBTQ in school and society, using LGBTQ character in TV-show, reading book written about LGBTQ more. They said it will take much time, but these help some people to accept them.

In interviews, I was sometime at a loss for words, but they waited for my asking. Thanks to their attitude, interviews went smoothly, but I regret one thing. It is my carelessness. In interviews, I asked about Trauma. They said that they didn’t understand my meaning. It took a few minutes to realize that they refuse to answer. This is my fault.

However, I think that regardless language and culture, some people can respect others. In order to be accepted, you should also respect them. It is natural, but sometimes forget. If you consider participating in this program, I think this is one of the most important things. If you join, you can learn a lot with your eyes. 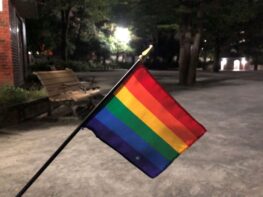