Proaction & Sharing at MUST 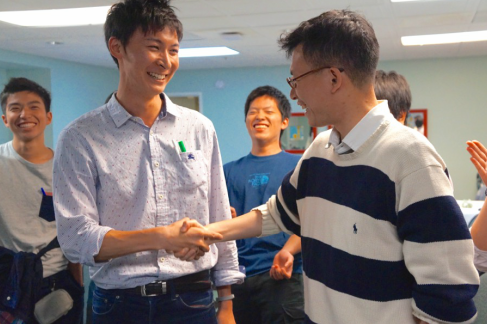 After two week’s preparation, the first sharing workshop & proaction cafe with Enactus in Macau University of Science and Technology (MUST) was held on March 20th. In total, there were 27 people including 9 from Enactus MUST, one of the three biggest organizations run by college students in the world, and some of them even rushed to join us after having mid-terms! The event was basically divided into two parts — a sharing session by VIA alumni, and a proaction cafe with Enactus MUST. With all the support from VIA buddies, and potential participants who are going to apply for the programs this summer (almost ten of them already got the offer for American Language and Culture [ALC] Program Summer 2016!), the workshop went smoothly. As a kick-off event of the newly-founded VIA community in MUST, it has been the very first platform for building up the connection of VIA members in MUST.

The original idea of creating this event was all about sharing. I joined the Exploring Social Innovation (ESI) Program Spring 2016 over the past Chinese New Year holiday. It might be the greatest two weeks ever in my life so far. On the program, I met so many wonderful people from Asian countries and also America who were doing cool things to change their own communities and even the whole world, which inspired me a lot. Also, I have learned about how to make the first step of a change happen from the activities and the visits to some organizations. It was a totally life-changing experience for the ones who are interested in solving social problems and achieving social impact, and it makes you believe the power of every individual in this planet again. We all can do something good for the society we are in. And actually there is no criteria for judging whether the thing you are doing is perfect or not. The only difference is whether you can keep being optimistic and enthusiastic.

Another important thing I have learnt from this program is to be yourself. We all will be confused about who we are and what exactly we want sometimes. But as long as we try to explore and experience more, we will definitely find our unique passions, or at least we will get to know what we do not want in life. This all has been a great inspiration for me. So after coming back, I have been eager to share what I have learnt from everyone I met on the program with others. I felt like it was time to do something to get more people to learn about all of these things nobody has done before. To be honest, this might be the very first time that someone has held this kind of sharing session in my university, not for organization promotion. Nobody told me what to do or what I was supposed to do, so actually this made me feel a little bit stressful while preparing this event. However, I just could not help thinking of those great examples provided by some change makers I met in San Francisco and every effort my teammates and I made as social change makers, which has been the motivation that told me to keep going. Along with this, there were a lot of people who heard of this for the first time and became interested. I had no excuse to let them down.

All of the effort was worth it in the end. I told the participants at the beginning of the sharing session, don’t just carefully listen to the ones who spoke in front of you, but please also try to tell others what you think. After doing self-introductions one by one, we got two alumni from American Language and Culture to share their own stories and advice for how to get fully prepared for the program as well. The following part was an introduction to empathy and design thinking. Later, participants didn’t focus theoretically but practiced using the methods they just learnt to help with four teams from Enactus as the last activity — the Proaction Cafe. I was really glad that many of the participants told me that they learnt something that day and decided to change their thinking and apply empathy and design thinking to their lives.

In the process, I got to meet more great people and hear their own stories. I hope VIA buddies in MUST can keep the connection for a really long time, hopefully forever. For the next steps, I’ve decided to build up the community making it more official, but basically only for sharing and providing a platform for effective communication. So far, we have created a group chat room in WeChat and a group page on Facebook. I hope social media can bring more like-minded people to join us.