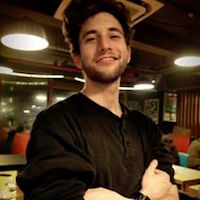 Daniel Brooks is a left-handed, somewhat color blind, and trilingual young man from San Luis Obispo, California. Attending a bilingual (English & Spanish) elementary school left him with a lifelong passion for studying languages, travelling, and communicating across cultures. In 2008 and 2009 he went with his mother, a nurse practitioner, and a group called ICARE International on two volunteer missions to provide free prescription eyewear and cataract surgery in Guatemala.

At UC Santa Cruz he studied Chinese and Linguistics and had a transformative experience studying abroad in Beijing. He has worked as an educator in various capacities: first as a peer-to-peer reproductive health counselor at a free clinic in San Luis Obispo, later as a spoken-English teacher in China, and most recently as a bilingual teaching assistant at his elementary school. He hopes this experience and his enthusiasm for travel and cross-cultural immersion will make his VIA fellowship as impactful and meaningful as possible. In his free time he enjoys video games, riding his bike, going to concerts, and hiking and running.