Understanding Challenges of the LGBTQ＋ Community 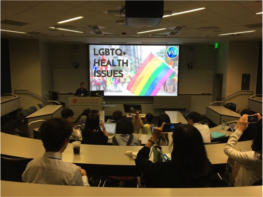 We learned clinical English, patient privacy, USMLE, design thinking, and so on. Especially, LGBTQ＋ health issues thinking left a strong impression on me. In the first LGBTQ＋ class, our lecturer told us that he had two mothers. I was surprised to hear that and the fact interested me very much. He has a biological mother and a genetic mother. Then, I had a rethink on what is family, and it broadened my concept of “family”.

In addition, I learned there are many LGBTQ＋ who are suffering from mental problems. The risk of depression or suicide rates of them are higher than sexual majorities. It comes from our sense of discrimination. Discrimination comes from our ignorance, so we all have to know sexual minorities more and more. In other words, we have to have a better education.

At first, I thought Asian countries were behind other countries in LGBQ+ problem, but I knew many Asian countries allowed same sex marriage. I thought more and more people understood sexual minority day by day. Not only LGBTQ＋s but also there are many patients who are suffering from what makes them minority. As a medical student, I feel that I have to put myself in minority’s shoes. Understanding different cultures is needed for doctors in the U.S. I want to learn other minority and many different cultures to understand patients more.

After the lecture, we visited the Castro which is famous for the city of LGBTQ＋. There were beautiful and traditional buildings and many rainbow flags there which were the symbols of them. I was surprised at that there is such a big community for LGBTQ+ in San Francisco. Compared to in Japan, in the U.S they unite tightly and are fighting for their rights. I felt the history of LGBTQ＋ in the atmosphere of this town.

We visited a clinic in the town. The clinic was mainly opened for LGBTQ＋s, and examination and preventing sexually transmitted disease treatment were done there. Music were playing there and there were many tables to talk. Its atmosphere was casual. The clinic was not only for medical check, but also it helped their mental health problems. 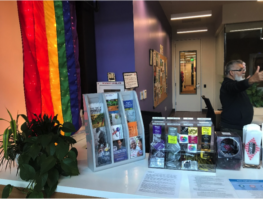 I thought its idea was breakthrough and I wished there would be more clinics such this in Japan in the future.

After visiting the Castro, we watched the movie “Harvey Milk” Harvey Milk was an American politician and the first openly gay elected official in the history of California. I was surprised because religion was one cause of sexual discrimination. I was touched because many LGBTQ＋s were united tightly, fighting, and pursuing their rights.