VIA Community Connects with President Obama in Jakarta

Exciting news for VIA!

VIA alumni and staff met today in Jakarta with President Obama as part of a small roundtable convened to discuss how young people create change in their communities. The VIA community members were alumni from Haverford College’s Center for Peace and Global Citizenship Indonesia Internship Program and the Indonesia-US Youth Leadership Program run in collaboration with George Mason University.

Teguh, an alumnus from our Haverford program, is a community organizer and activist based in Jakarta. He has worked for Suara Kita, an LGBT organization in Indonesia, and is very active in networking amongst civil society groups working for social change.

Agnes joined our youth leadership program in Bali and Washington, D.C. in 2015. She is a law student at Universitas Indonesia. She is an active member of the Asian Law Students’ Association, where she participates in many activities, including pro-bono clinics for civilians focusing on land registration and land rights. She is also an elected Vice-President of Leo Club Jakarta Kota, which organizes community service events, and initiated a project called Indonesia Bermimpi (Indonesia Dreams)—inspired by Humans of New York—that shares the dreams of Indonesians on a news portal website.

Tia is a gender equality advocate and works with youth as a facilitator and trainer in many issue areas, including preventing violence against women, sexual and gender identity minority rights, and sexual and reproductive health. Her passion is promoting justice for all. She also works as a VIA staff member in Yogyakarta to connect with community groups for VIA’s gender programs. 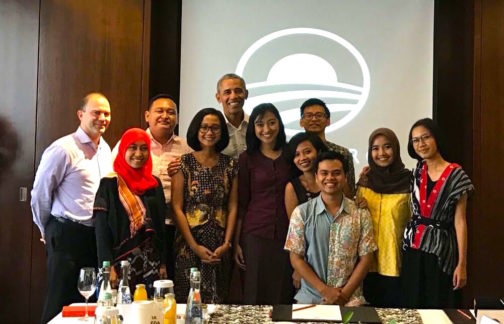